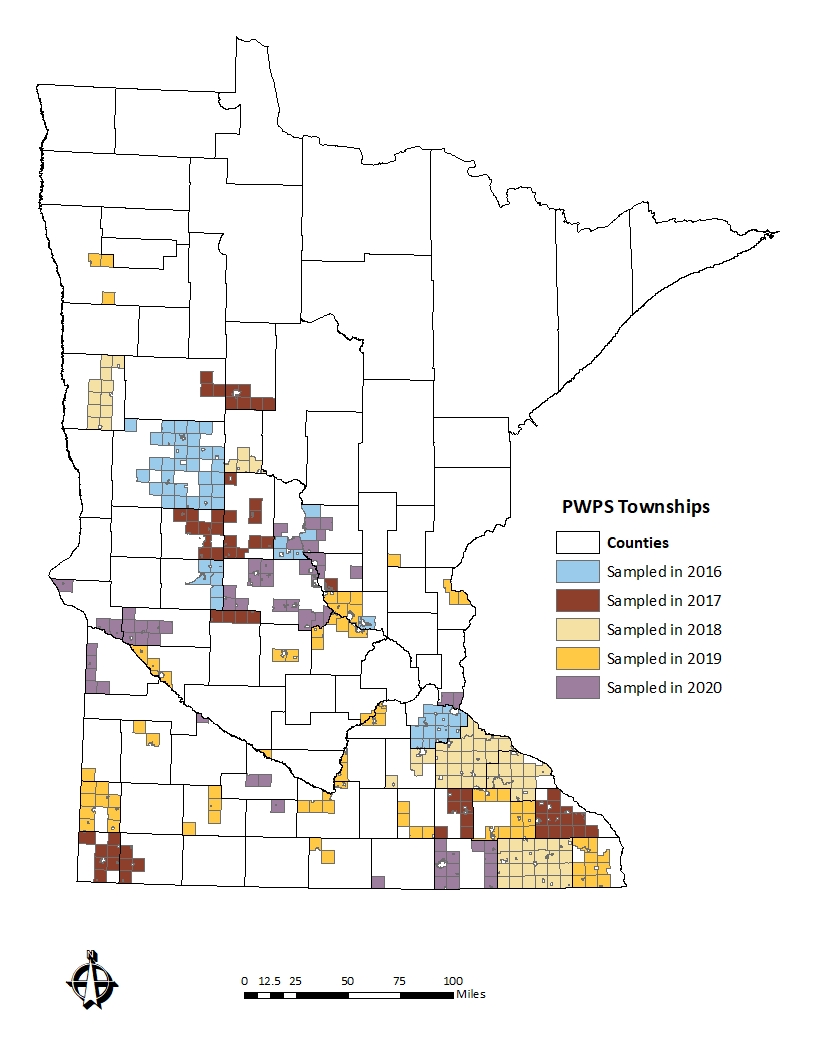 The primary purpose of the Private Well Pesticide Sampling (PWPS) Project is to provide information to homeowners on the presence of pesticides in their drinking water.

The MDA also uses the information collected to help guide pesticide management decision making. Additionally, the information is used to evaluate the relationship between pesticide and nitrate in areas potentially vulnerable to groundwater contamination from agricultural activities.

During Phase 1 of the PWPS Project (2016-spring 2021) wells were selected using the following criteria:

Tests detect both commonly used pesticides and their primary breakdown products. Once completed, all testing results are shared with homeowners and the general public.

Beginning in the summer of 2021, Phase 2 of the PWPS Project will focus on revisiting areas previously tested between 2016-2018 to perform testing of cyanazine degradates. Sampling will begin in counties of southeastern Minnesota that were sampled during this timeframe and will expand as resources permit. Counties include Dodge, Fillmore, Goodhue, Rice, Wabasha, and Winona. Pesticide analysis through the contract laboratory will include the parent compounds of cyanazine and atrazine, as well as some of their known degradates, including: cyanazine acid, cyanazine amide, deethylcyanazine, deethylcyanazine acid, deethylcyanazine amide, deisopropylatrazine, and didealkylatrazine. Desethylatrazine and hydroxyatrazine, which are only degradates of atrazine will also be included.

The Groundwater Protection Act (MN Statute 103H) directs the MDA to evaluate the detection of pollution resulting from agricultural chemicals in groundwater (MN Statute 103H.251). At the direction of the Minnesota Legislature (Minnesota Session Law 2013, Chapter 137, Article 2, Section 3, part b) the MDA began evaluating pesticide presence and magnitude in private residential drinking water wells in Dakota County in September of 2014 as part of the PWPS Pilot Project. The PWPS Pilot Project served as a model for the implementation of the PWPS Project throughout the state.

Funding
The PWPS Project is funded primarily by the Clean Water Land and Legacy Amendment. Funds from the MDA's dedicated pesticide funds are also used. These dollars are collected from the sale of pesticides.

Counties and townships are selected using the techniques defined in the PWPS Project Work Plan. The cost of sampling and testing is free to the homeowner.