Velvet longhorned beetle is originally from Asia and parts of Eastern Europe. Spreads to new areas through movement of infested wood and by flying. 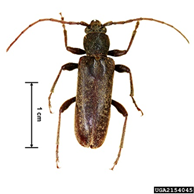 Preferred hosts of the velvet longhorned beetle are reported to be apple (Malus) and mulberry (Morus). This beetle has also been recovered from maple (Acer) in Canada and is attacking living cherry and peach trees in Utah (Prunus). The infested furniture imported from China is made from a type of walnut (Juglans). The host range appears to be broad and not enough is known about this insect to know what hosts are at greatest risk in Minnesota. Since this insect seems to have a particular ability to complete development under dry wood conditions the range of potential hosts may include dry cut wood with bark as well as recently cut logs and living trees.

The velvet longhorned beetle has been detected in Minnesota via trap surveys for exotic bark beetles and wood borers conducted by the USDA and/or MDA:

This insect is currently considered established in Utah and Illinois. This beetle has also been recovered from traps and found through other circumstances in a number of other states and Canadian Provinces. However, it is not clear if those recoveries were new introductions or established populations.

In its native range, larvae overwinter in wood and pupate in spring. Adults emerge from wood and are active from June to August. After mating, females lay eggs on the bark of trees. Larvae hatch from the eggs and tunnel under the bark and eventually into the wood. A single generation takes at least one year and could take two or more to complete.

This insect seems to be particularly tolerant of tunneling in dry wood and this has been demonstrated from inspecting infested furniture. There is some indication that the life cycle of the insect may take longer to complete when infesting dry wood products. In some pieces of infested furniture, insect activity was not detected until 18 months after the furniture was purchased. There are also some indications from studies on this insect in Asia that it may be capable of infesting dry wood products such as furniture or other material provided that the bark remains. This is not typical of insects in this family which are mainly restricted to infesting dying trees or recently cut logs.

Many species of longhorned beetles have a similar appearance.

The velvet longhorned beetle is an exotic species that has the potential to become a pest in Minnesota. Regulatory actions including restricting the movement of host material, control actions or eradication could be taken in response to an infestation.

In 2016 the MDA discovered that rustic log furniture manufactured in China and sold in Minnesota was infested with the velvet longhorned beetle. The MDA along with the USDA and other State Departments of Agriculture are working with the furniture seller to recover and destroy all infested furniture.

The ultimate pest potential of this insect in Minnesota and North America is yet to be determined. In most locations where beetles have been found it has not been possible to document a local infestation or pest impact. The exception has been Utah, where a significant presence of Trichoferus campestris has been documented and pest impact is being evaluated. Contact the MDA via email at reportapest@state.mn.us if you suspect the presence of velvet longhorned beetle in Minnesota. Please also visit Rustic Log Furniture Alert for additional help.