Many different plants are consumed by Japanese beetle adults, some of their favorites include roses, grapes, apple and basswood. Larvae feed on the roots of grasses and can be a problem for yards and turf. Read about advice on managing Japanese beetle from the University of Minnesota.

Japanese beetle is present in most of the eastern United States and has been present in Minnesota for decades. Many people first became aware of Japanese beetle when they were very abundant in the Twin Cities metro area in 2011.

Adult Japanese beetles become active in Minnesota in late June/early July. Although they are able to eat many different kinds of plants, for anyone who has experienced Japanese beetle, it is clear that they have some plants they prefer over others. Adult beetles can be found congregating on these plants and defoliating them in a manner described as “skeletonizing” because they leave the leaf veins intact but eat all of the tissue from between them. Adult beetles lay eggs in the soil and the larvae live in the soil feeding on the roots of grass until they pupate into adults beetles and emerge the following year.

NEW: Conditions related to movement of plant products that could carry Japanese beetle between states are set by the Japanese Beetle Harmonization Plan which has recently been updated, read about the updated plan. 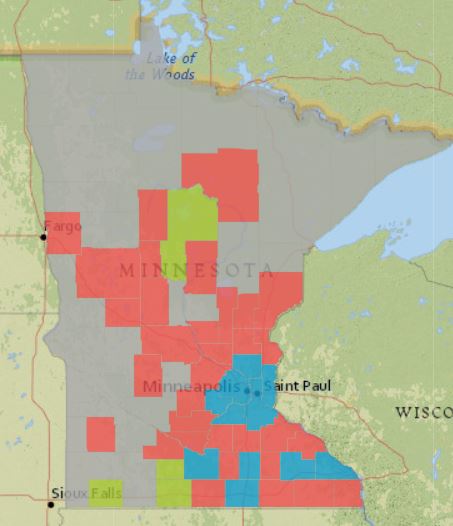 If you think you have an infestation of Japanese beetles, and you're located in a county that Japanese beetle has not been reported or is not known to be abundant (see map above), please visit our Arrest the Pest page to report your findings to the MDA.