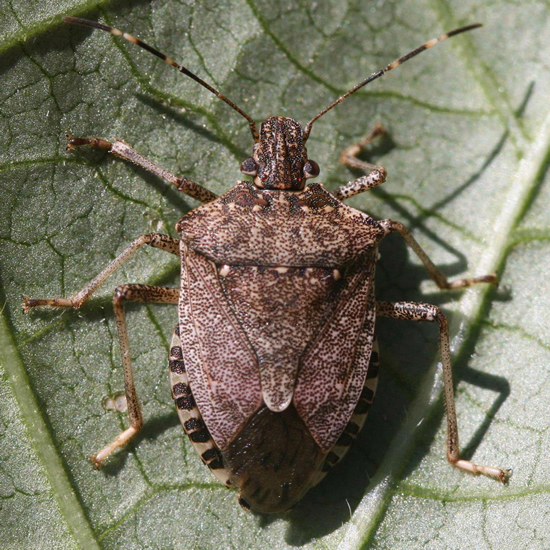 Brown marmorated stink bug (BMSB) has a wide range of host plants. Over 300 plant species in agricultural, horticultural, and natural settings are susceptible to attack. It has been observed on hundreds of tree species in the Mid-Atlantic States but it is unclear what species will be preferred in Minnesota. Brown marmorated stink bug tends to congregate on tall plants and trees rather than plants lower to the ground. After emerging in spring, adults are found on almost any plant exposed to the sun. Plants located near overwintering sites are a common place to find adult insects early in the season. Plants with fruits, buds, and pods; in places such as orchards; tend to attract this insect more often than plants without those reproductive structures. Possible target crops in Minnesota include: apple, grape, soybean and other vegetables commonly grown in private and community gardens.

Brown marmorated stink bug prefers fruits as a food-source, but will feed on nearly all plant parts. Injury caused by feeding produces small necrotic areas on the outer surface of fruits and leaves. In apples, feeding by this insect creates cork-like dead spots that can become sunken and render the fruit unsuitable for market. All damage done is superficial and the fruit is safe to eat, however not preferred by consumers. Most damaged fruit is sent off for processing. Significant injury caused by brown marmorated stink bug in orchards can result in large economic losses.

Due to unpleasant odor, large size, and sheer numbers, BMSB can be a nasty home invader as well. Large numbers will congregate and invade buildings in search of overwintering sites.

The first find of BMSB in Minnesota was in 2010. Since then it has been detected in a number of areas throughout Minnesota and reproducing populations have been confirmed in several areas of the Twin Cities. Trap-based monitoring and citizen reports indicate that stink bug numbers increased substantially in 2016 and 2017.

Across North America, BMSB has been found in most states as well as Canada. Impacts across this area vary from none to household nuisance to agricultural pest.

BMSB has been found in almost every city within the Twin Cities metro area; Anoka, Carver, Dakota, Hennepin, Ramsey, Scott, and Washington counties. There is no need to report new detections of BMSB within the seven counties listed above.

Adult BMSB are ½ -inch-long shield-shaped insects from the true bug order (Hemiptera). They have long piercing-sucking mouthparts held under the body between the legs, and often release an odor when disturbed or crushed. The name 'brown marmorated stink bug' describes their appearance: they are brown with a marmorated (marble-patterned) exterior. Nymphs (young) are more colorful, with red and orange markings.

Other key features to look for when identifying adult BMSB are the rounded 'shoulders', the alternating dark-and-light pattern along the edges of the abdomen, the dark-colored antennae with light-colored bands, and the green and gold flecks on the underside of their 'shoulders'.

Brown marmorated stink bug likely completes one generation per year in Minnesota and overwinters as adults in a hibernation-like state in woodlots, households, sheds and garages. Adults may emerge as early as March and April and produce offspring in June. Females deposit eggs in clusters of approximately 25. Nymphs are present and active during the summer months. There are five nymphal stages. Adults feed until September and October, when populations typically peak, and then seek overwintering sites. It takes approximately 964 degree days (base = 57.2°F) for eggs to develop into adults (Wilson et al. 2016).

There are many stink bugs in Minnesota, most of which can be easily confused with BMSB. Native brown stink bugs (Euschistus spp.) are especially similar to BMSB. Other species commonly mistaken for BMSB that are not in the stink bug family (Pentatomidae) include: the western conifer seed bug (Leptoglossus occidentalis), the squash bug (Anasa tristis), and the box elder bug (Boisea trivittata).

The MDA has a joint project with the University of Minnesota (U of M) to facilitate monitoring for BMSB in Minnesota, identify developing problem areas and research potential biological control. The MDA has conducted risk-based surveys for BMSB since 2014 using ground pyramid traps baited with an aggregate pheromone for this insect. Developing problem areas have been identified in the Twin Cities and many new confirmations have been made through citizen reports. The U of M evaluated Trissolcus japonicus, a wasp species that parasitize BMSB eggs in its native range for cold hardiness. Results indicate T. japonicus can survive Minnesota’s cold winters and has potential as a biological control agent.

Monitoring indicates that BMSB numbers are on the rise in Minnesota. Experience in other states suggest that household nuisance problems generally precede agricultural pest problems caused by BMSB. In 2016, stink bugs began to cause some household nuisance issues in the Twin Cities. This means that there is also increasing risk to crops in these areas, particularly to apples, grapes and vegetables.

Continued monitoring of stink bug numbers is important so that areas where agricultural pest problems might develop can be anticipated. The MDA and U of M continue to facilitate trap-based monitoring at sites at high-risk for damage such as apple orchards. In addition, citizen reports are an important tool in keeping tabs on stink bug numbers as well. If you observe an insect that looks like BMSB outside the Twin Cities metro area, please take a picture or sample and contact the MDA via Report a Pest.

Although BMSB is slowly spreading in affected states by flying from crop-to-crop, it is also a hitchhiker, and individuals can quickly be transported into new states on vehicles, trailers, RV’s, or by moving infested materials (e.g. woodsheds). To slow this spread, please inspect your vehicles and any accompanying equipment, and remove any suspect insects, before leaving heavily infested areas such as the eastern U.S.

In Mid-Atlantic States, where BMSB is a severe problem, an integrated pest management approach is being employed that uses a combination of monitoring, insecticide use, and other natural means. Research is ongoing on the development of biocontrol throughout the country.