Bacterial Wilt and Canker of Tomato 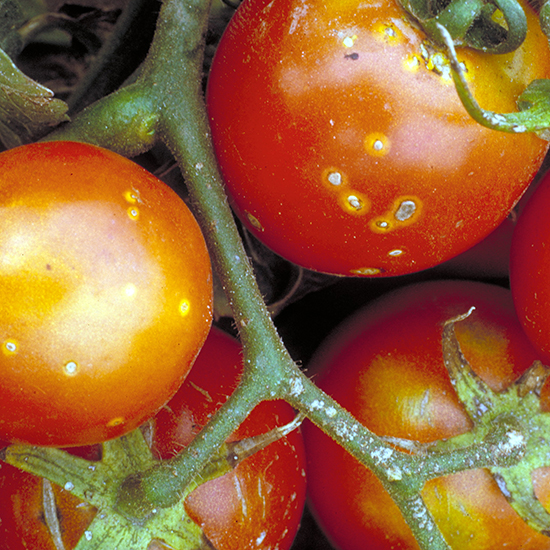 Cmm affects solanaceous plants including tomato, pepper, eggplant and potato, but it is most pathogenic in tomato. Solanaceous weeds such as nightshade are also potential hosts and could act as a reservoir for the bacteria. Cmm can be a significant problem for tomato production , but the occurrence of significant issues are sporadic.

This pathogen is known to occur in tomato production areas around the world but has only sporadically caused significant production issues. This pathogen has a broad distribution but has not frequently been seen in Minnesota. However, during 2015 the MDA confirmed the presence of Clavibacter michiganensis subsp. michiganensis at 39 sites in 16 counties as part of fruit and vegetable surveys.

Clavibacter michiganensis subsp. michiganensis (Cmm) is a bacterium that causes the disease called bacterial wilt and canker of tomato. It is considered a major issue for tomato production around the world and can be easily moved in seeds or transplants. Once Cmm has been introduced to a growing area, it can persist in host plants and residue for years though it can only live for a short time in soil without host material. There are no cures for infected plants, so the best defense is not to introduce the pathogen into growing areas through infested plants or seed.

Confirming the presence of Cmm will require a laboratory test available from the University of Minnesota Plant Disease Clinic. Symptoms of infection may include foliar yellowing, browning or wilting; stems developing yellow to brownish pith (middle area of stem); and fruit developing yellow/brown raised areas with lighter color areas surrounding them (halos).

Many other diseases can also be found on tomatoes in Minnesota. For help in diagnosing them, visit the University of Minnesota webpage.

There are no federal, state or local regulations regarding this pathogen. However, sale or export of tomato seed may require documentation that the pathogen is not present in the seed.

When buying seeds or plants, ensure that they are coming from sources that are known to be disease-free. Cmm is primarily a problem for tomatoes, but could also be introduced to a garden or greenhouse by planting infected peppers or other solanaceous plants.

The Minnesota Department of Agriculture is monitoring for Cmm through our pathways survey.

Contact the MDA via Arrest the Pest if you suspect you have found bacterial wilt and canker of tomato.