The MDA is seeking public input on the Commissioner’s preliminary decision to designate neonicotinoid insecticides clothianidin, imidacloprid, and thiamethoxam, as “Surface Water Pesticides of Concern”. “Surface Water Pesticide of Concern” means the detection of a pesticide in surface water at concentrations of concern relative to a water quality “Reference Value” not due to misuse or unusual or unique circumstances, but likely to be the result of normal use of a product or practice.

The proposed decision is based on the following guidelines as recommended in the Pesticide Management Plan (PMP):

As a part of the proposed designation as “Surface Water Pesticide of Concern”, the MDA may reformat previously developed pollinator-focused BMPs for Neonicotinoids to have a water quality focus.

Full announcement of the notice can be viewed at the Minnesota State Register website (Volume 44, Number 33) or by contacting Trisha Leaf.

Comments should be submitted by letter or e-mail to Trisha Leaf.

In 2017 the MDA’s ambient monitoring program sampled over 200 river, stream and lake locations throughout the state for pesticides and/or nutrients.

In 1987, the Minnesota Legislature amended the Minnesota Pesticide Control Law (MN Statute 18B.04). It directed the MDA to determine the impact of pesticides on the environment, including the impacts on surface water and groundwater.

Chlorpyrifos Response Plan: This plan was developed in response to continued detections of chlorpyrifos in rivers, streams and lakes and the determination of chlorpyrifos water quality impairments of rivers and streams in agricultural areas of Minnesota.

There are ten waterbodies in Minnesota that are either designated, or proposed, by the MPCA as impaired on the USEPA 303(d) Impaired Waters List for currently registered pesticides. These listings are a result of the MPCA assessment of the MDA collected surface water pesticide data. The 2017 and 2018 MDA pesticide water quality data will be reviewed by MPCA as part of the 2020 USEPA 303(d) Impaired Waters List assessment process. 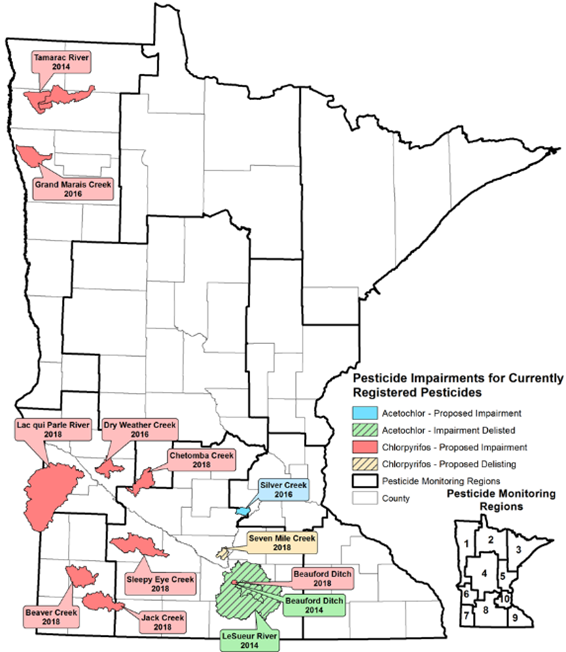 All of the pesticide data collected as part of MDAs ambient monitoring program is publicly available through the Water Quality Portal or by contacting MDA.  The MDA will continue to improve its program to expand monitoring to new locations and to include additional pesticide analytes, as resources and needs permit. The MDA is committed to maintaining its long-term data record to allow for continued assessment of the impacts of pesticides on surface water from routine use.