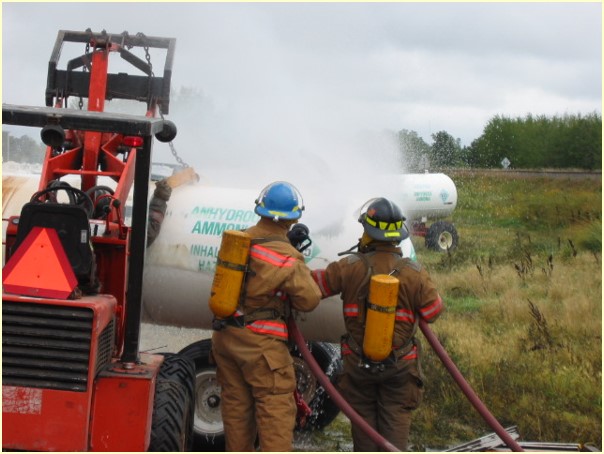 If you respond to, prepare for, or will be in charge when a spill of anhydrous ammonia occurs, you can use the information contained on this page for an effective response. Information on this site is geared toward providing in-depth instruction for our first responders, the fire departments of Minnesota.

What is anhydrous ammonia?

Anhydrous ammonia is used as a fertilizer by field corn and wheat growers. Anhydrous ammonia (or just called ammonia) provides nitrogen, an essential plant nutrient to maximize yields. Ammonia is also found naturally in the environment, the result of vegetation and animal waste decay.

How is it transported and applied?

Fertilizer ammonia is transported from the site of production via barge, pipeline, rail, and truck to fertilizer terminals or directly to dealers. To conserve space and make it easy to handle, ammonia is kept as a liquid under pressure in specially designed bulk tanks. The fertilizer dealer pumps liquid ammonia from their bulk tank into smaller mobile nurse tanks (illustration of common transfer setup). These nurse tanks are towed to a field and hitched up behind a tractor with a tool bar equipped with knives that inject the liquid ammonia into the soil. Once in the soil, ammonia will quickly react with soil moisture and change to a form the crop can use.

What is anhydrous ammonia used for?

Ammonia was initially used to produce explosives. After WWI ammonia was used as a fertilizer and in the manufacture of numerous other chemicals.  It is also very commonly used as a refrigerant, often for food processing and cold storage facilities. Anhydrous ammonia has also been used of late as a precursor in the illegal production of the highly addictive drug, methamphetamine.  Although it has many uses and the MDA is only responsible for it when used as an agricultural chemical, much of the response information here does carry over to those other uses.

How is anhydrous ammonia produced?

Ammonia is commercially produced by the reaction of nitrogen from the air and hydrogen gas (from the methane found in natural gas) under high temperature and pressure. This process excludes water thus the term "anhydrous."  Fritz Haber of Germany was the first to successfully produce ammonia for which he received the Nobel Prize in Chemistry. Later Carl Bosch refined the process which lead to the first commercial production plant in 1913.

What are some details about anhydrous ammonia itself?

What are the considerations in a response to an anhydrous ammonia spill?

What should I consider after a spill?