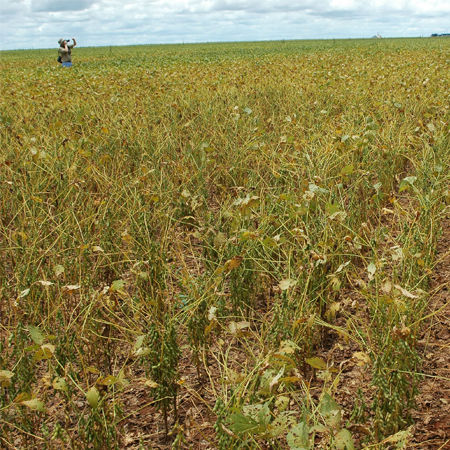 Host Plants and Impact - Soybean rust can infect about 90 different plant species, many of which are legumes. Commercially important hosts in Minnesota include soybeans, dry beans and other legumes.

Of the two species that cause soybean rust, only the more aggressive P. pachyrhizi has been found in the continental United States. The first find was in Louisiana in 2004, and it is now known to occur in several southeastern states. In 2005 researchers were able to document the presence of soybean rust spores in rain samples collected in Minnesota but no disease was reported. A monitoring network tracks the yearly occurrence of soybean rust in the U.S.

Soybean rust can cause significant yield loss. It requires live plants to complete its life cycle and produces two kinds of spores. In Minnesota, soybeans and other potential hosts do not survive the winter temperatures. In order for disease to occur here, spores have to blow into the state during the growing season from more southerly areas (as happens with some rusts that infect wheat) at a time when conditions are favorable for infection and disease development - extended periods of high humidity and moderate temperatures. In southern states, the pathogen overwinters on kudzu, an invasive plant of which the closest report to Minnesota is from an Illinois county located on the southeastern border of Iowa.

Soybean rust first appears in the lower canopy, causing symptoms on both the upper and lower leaf surface. The disease may be hard to identify in the early stages but as it progresses, symptoms on both surfaces become pronounced with reddish-brown pustules developing on the lower surface. Plants that may appear slightly chlorotic early on will deteriorate to brown, wilted plants with dead leaves, many of which are eventually dropped.

There are no local, state or federal regulations related to soybean rust.

Contact the MDA via Arrest the Pest if you suspect you have found soybean rust in Minnesota.