The University of Minnesota conducted an agronomic study of industrial hemp during the 2017 season with support from Minnesota Department of Agriculture Industrial Hemp Pilot Program (MDA-IHPP). The objective of the study was to compare commercially available industrial hemp varieties for grain production in various agricultural regions of Minnesota. The laboratory of Professor George Weiblen, in the Plant and Microbial Biology, coordinated the project. Participants included the Minnesota Agricultural Experiment Station (MAES) on the St. Paul campus, University of Minnesota Research and Outreach Centers (ROC) in Crookston, Morris and Rosemount, White Earth Nation Natural Resource Department, and Minnesota Crop Improvement Association (MCIA).

Twelve Canadian certified industrial hemp varieties included in the study (Table 2) were grown in randomized complete blocks comprising four replicates per variety at each site. Trial blocks located at five sites (Table 1) were planted during the week of June 5- 8, 2017. A sixth block was planted on June 26, 2017 at MAES.

Plots within blocks at three sites St. Paul, Rosemount, and White Earth were 20' long with six rows spaced at 7". Plots within blocks at Crookston and Morris were 10' long with eight rows spaced at 7.5". The seeding rate at the five sites planted June 5- 8 was 25 pounds per acre planted at a depth of 0.5"- 1.0". The sixth block planted at MAES- St. Paul on June 26 was seeded at a 30 pounds per acre when corrected for germination rates provided by MCIA. Fertilizer was applied at four of the study sites at rates recommended for Canola production. No fertilizer was applied at White Earth. Weed management after planting varied among sites with manual weeding and inter-row hoeing conducted at St. Paul and Crookston. Glyphosate was applied immediately after planting at Crookston and no weed management was conducted at Rosemount or White Earth. Blocks were hand-harvested at 105 days after planting (DAP) by cutting and bagging seed heads from the center two (or four) rows of 20' (and 10') plots, respectively. Harvested seed heads were dried at 105°F prior to threshing and weighing the grain.

Stands grew rapidly in height during the first 40 growing days and slowed as plants approached maturity (Figure 1). Mean heights and grain yields varied considerably among sites while the relative performance of varieties was similar across locations. For example, yields at St. Paul exceeded those of other sites while the taller, dual-use Canda yielded more grain at 105 DAP than did short, grain FINOLA at all locations (Figure 2). All twelve varieties were twice as tall on average at harvest in St. Paul than in White Earth (Figure 3). These two were also the most divergent in terms of agronomic treatment. St. Paul was hand-weeded and soils matched Canola nutrient requirements while White Earth neither received fertilizer or weed treatment. Study averages of grain yield per variety fell into three classes (Figure 4). Averaging >1,300 pounds per acre, X-59 had substantially higher yield than the other varieties. Seven varieties yielded grain ranging 800- 1,100 pounds per acre while four averaged 400- 800 pounds per acre. 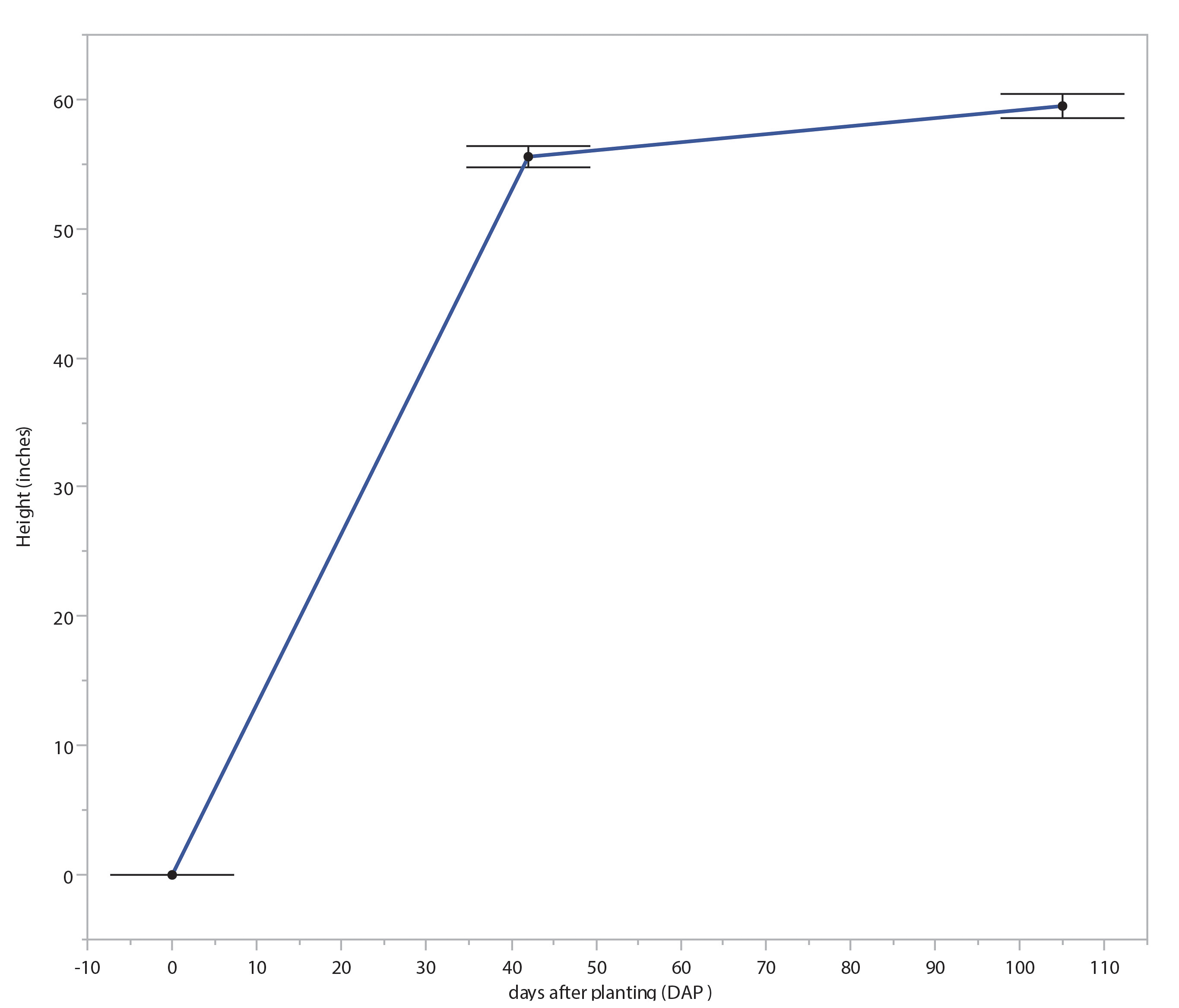 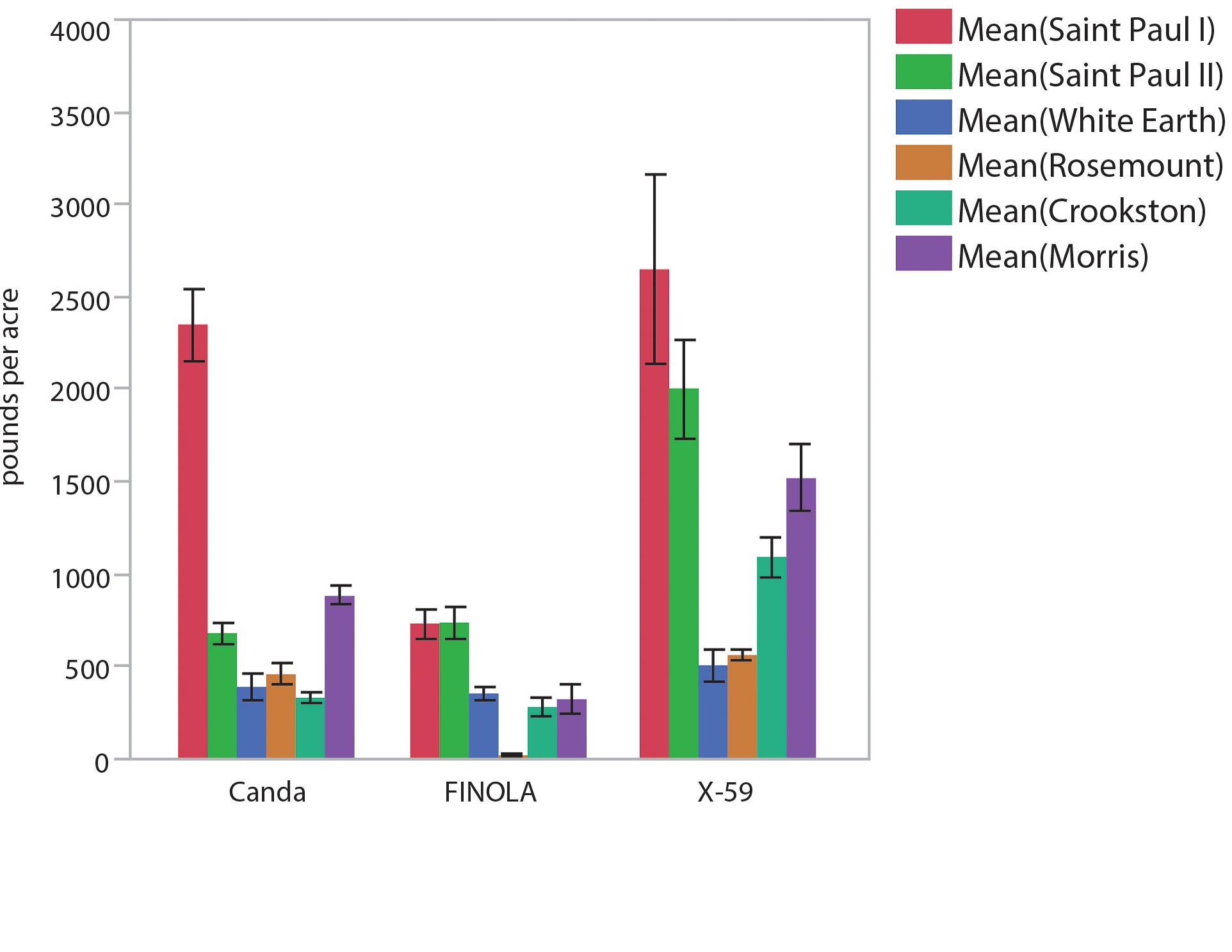 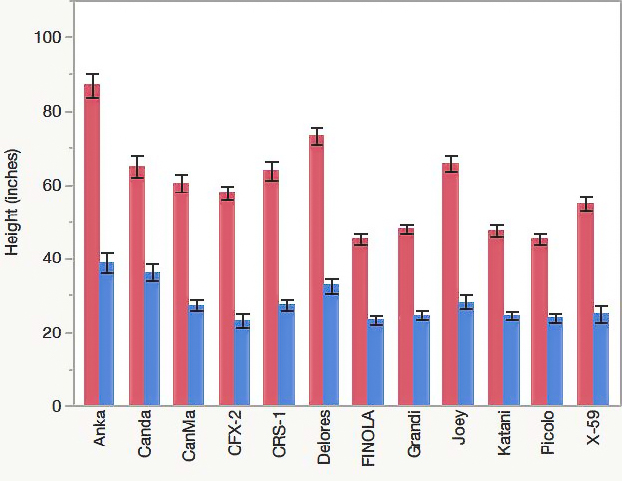 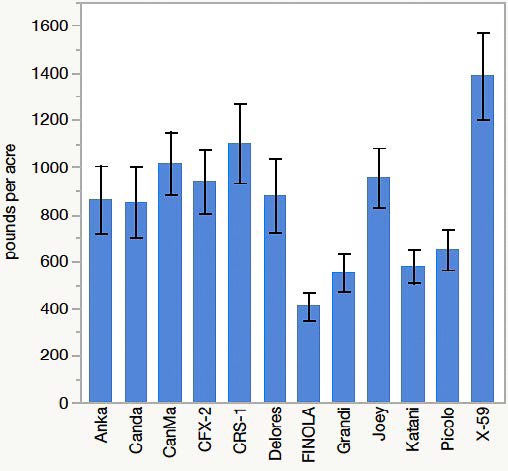 Our results demonstrate that industrial hemp in Minnesota can yield similar quantities of grain as in Canada. Yields differed among varieties and locations according to differences in genetics and agronomic treatments. The highest yields were obtained through a combination of weed management and fertilizer application. The greatest differences in yield at 105 DAP were observed among tall, dual-use varieties (grain and fiber) and short, early maturing grain varieties. It is likely that we underestimated potential yield for short, early-maturing varieties that should be harvested no later than 90 DAP to avoid shattering and bird predation

Observations of pests and diseases were few but weed pressure was intense at most locations. Weed management must be considered especially when selecting short stature varieties for production in Minnesota. If stand density fails to achieve canopy closure, weed pressure is more likely to overtop short-statured varieties than tall, dual use varieties. Seeding rate and timing of planting are critical for stand establishment. We recommend seeding when soil temperatures have reached 50- 55°F (mid to late June), at least 30 pounds per acre and with minimal planting depth (1/4"). Planting just before or after rain can hasten emergence but hail within the first two weeks after emergence can be devastating. Soil fertility is a consideration for both grain and fiber production. Failure to provide adequate nutrition at White Earth affected stand height and grain yields in all varieties.

These results suggest that favorable combinations of genetics and agronomic practices can support competitive industrial hemp grain production in Minnesota. We recommend that future directions for the Industrial Hemp Research Program include development of weed management strategies appropriate to our region. Another promising avenue for future study is to examine how hemp seed oil yield, fatty acid composition and protein content of Minnesota hemp grain compare to that of other regions.