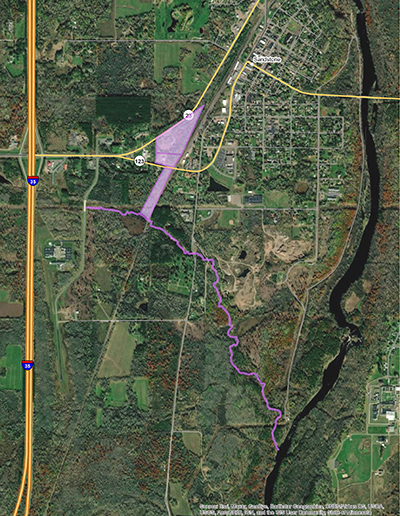 The former Kettle River Company Creosote Plant is located on approximately seven acres in Sandstone, Minnesota. The site is triangular in shape located between Highway 23 to the north, Highway 123 to the south and a railroad corridor to the east. Currently the site includes an automobile repair shop/salvage yard and a private residence, a gas station/convenience store, and a custom automobile body and repair shop.

Historical documents indicate that the Kettle River Company used creosote as a wood preservative to treat timbers, paving blocks, and railroad ties at the site from about 1905 through 1918. The creosote plant's buildings and structures were reportedly dismantled in 1920 and the site was abandoned.

In early 2000, the Minnesota Pollution Control Agency (MPCA) was contacted following the discovery of an unknown black substance in Skunk Creek, located approximately one-half mile southeast of the site, by a utility company trenching across the creek to provide electrical service to a new residence. Preliminary investigations by the MPCA and the Minnesota Department of Agriculture (MDA) staff determined the substance to be creosote and that a nearby potable well contained impacts associated with creosote.

In subsequent investigations, the MPCA and the MDA identified the location of the former creosote plant as the source of the creosote, including the discovery of creosote and tar in the soils at the site, and portions and remnants of the foundations of several of the creosote plants' buildings and structures. Creosote was used at the site as a wood preservative and since it is a pesticide, the MDA is responsible for regulatory oversight and clean-up guidance.

Because no viable Responsible Party was identified, the MDA requested the site be added to the Minnesota Permanent List of Priorities in 2002 and it remains a state-funded project.

The site geology consists of a thin, surficial layer of unconsolidated sediments, predominantly underlain by sandstone bedrock of the Hinckley Formation. The surficial sediments are composed of silty sand/gravel to silty clay and are generally less than 30 feet thick.

Groundwater is generally encountered from approximately 10 to 20 feet below ground surface at the site. The regional ground water flow direction is to the east and southeast towards the Kettle River. Monitoring wells at the site indicate that shallow ground water flow is similarly to the east and southeast, and monitoring wells along and near Skunk Creek indicate that ground water levels and flow direction are highly influenced by the creek. In general, drinking water supplies are obtained from private wells that are generally less than 100 feet deep, and larger supplies of water are commonly obtained from deeper wells completed in the Hinckley and Fond du Lac Formations.

Since 2002, the MDA has conducted multiple phases of investigations at the site and at off-site locations. These investigations have identified moderate to high levels of polynuclear aromatic hydrocarbons (PAHs) and volatile organic compounds (VOCs) in soil and groundwater at the site, and in groundwater, surface water, creek bank soil, and sediments in Skunk Creek at off-site locations.

These investigations have identified significant impacts of PAHs and VOCs in soil related to the operations of the former creosote plant and remain on-going in order to define the extent and magnitude of the creosote impacts. Soil and debris containing concentrations of PAHs and VOCs requiring remedial actions have been identified within the footprints of the former creosote plant's buildings and structures, at areas surrounding the plant and its areas of operations, and discontinuously across the Site.

Remedial actions, comprised of excavation and disposal of creosote-impacted soil and debris, have been conducted since 2005 and remain on-going.  Soil requiring remedial action has been identified in surface soils and in at-depth soils that immediately overlie the sandstone bedrock (varying across the Site from approximately 12 and 22 feet below ground surface).

Since 2002, the MDA has conducted groundwater and surface water monitoring and sampling at the site and nearby properties to monitor impacts associated with the former creosote plant.  The monitoring well network is comprised of 43 shallow and deep-nested wells, completed within the unconsolidated surficial sediments and the sandstone bedrock.  In addition, 8 domestic water-supply wells are regularly sampled.  The MDA's surface water monitoring and sampling includes 11 locations along Skunk Creek and the Kettle River, and two natural springs located adjacent to Skunk Creek.

Investigation findings indicate that groundwater contamination at the site may be the result of flow through unconsolidated soils and at properties located down-gradient of the site by flow through the fractured sandstone bedrock.  In addition, impacts to groundwater, surface water, creek bank soil, and sediments in Skunk Creek may be the result of direct disposal of creosote to the creek along former railroad tracks that extended from the former creosote plant to the former sandstone quarries located along the Kettle River.

The MDA has also conducted soil vapor and ambient air sampling along accessible portions of Skunk Creek to evaluate the potential risks associated with impacted surface water, creek bank soil, and sediments in the creek.

For more information, please contact the MDA staff listed above.