Boxwood blight is caused by a fungal pathogen that can infect all above-ground plant parts, resulting in leaf lesions, leaf drop, stem lesions and severe dieback. 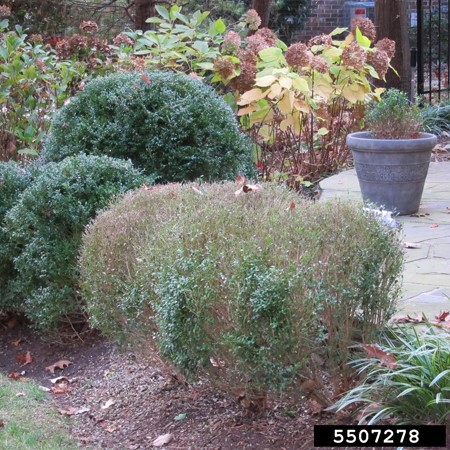 Boxwood (Buxus) is the primary host for boxwood blight, but also infects Pachysandra and sweet box (Sarcococca). Boxwood is a broad-leaved evergreen (leaves do not drop in winter) shrub and is sometimes used in decorative wreaths, which can be infected with the disease.

Boxwood blight is caused by two closely related fungal pathogens that can infect all above-ground plant parts, resulting in leaf lesions, leaf drop, stem lesions and severe dieback. Spread to new areas is mainly through movement of infected plants, but not all infected plants show symptoms, which can make long-distance spread difficult to manage. Once the disease is on a site, infections can develop and spread rapidly, especially when humidity is high. The pathogen can remain viable in infected debris for several years.

Symptomatic plants have leaf spots with a dark-brown border and a tan center. Infected leaves may turn brown from the tip down and fall off. Severely infected plants have multiple bare branches due to heavy leaf loss. Long thin black streaks can be seen on infected stems. Under the right environmental conditions, small, white, tuft-like clumps of fungal spores can be seen on infected leaves and stems. There are several diseases that look like boxwood blight. Diagnosis should be confirmed by submitting a sample to the University of Minnesota plant disease clinic. 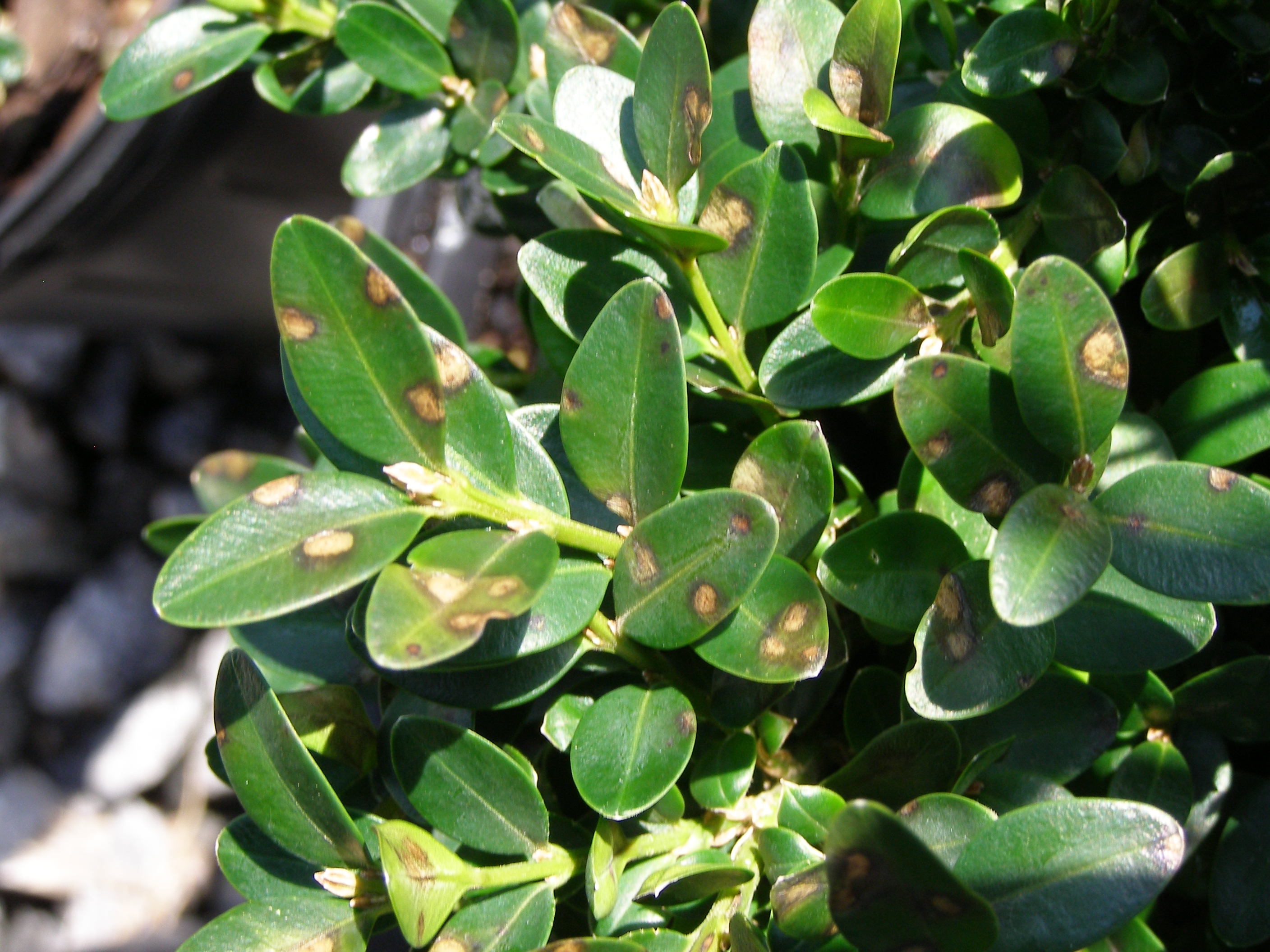 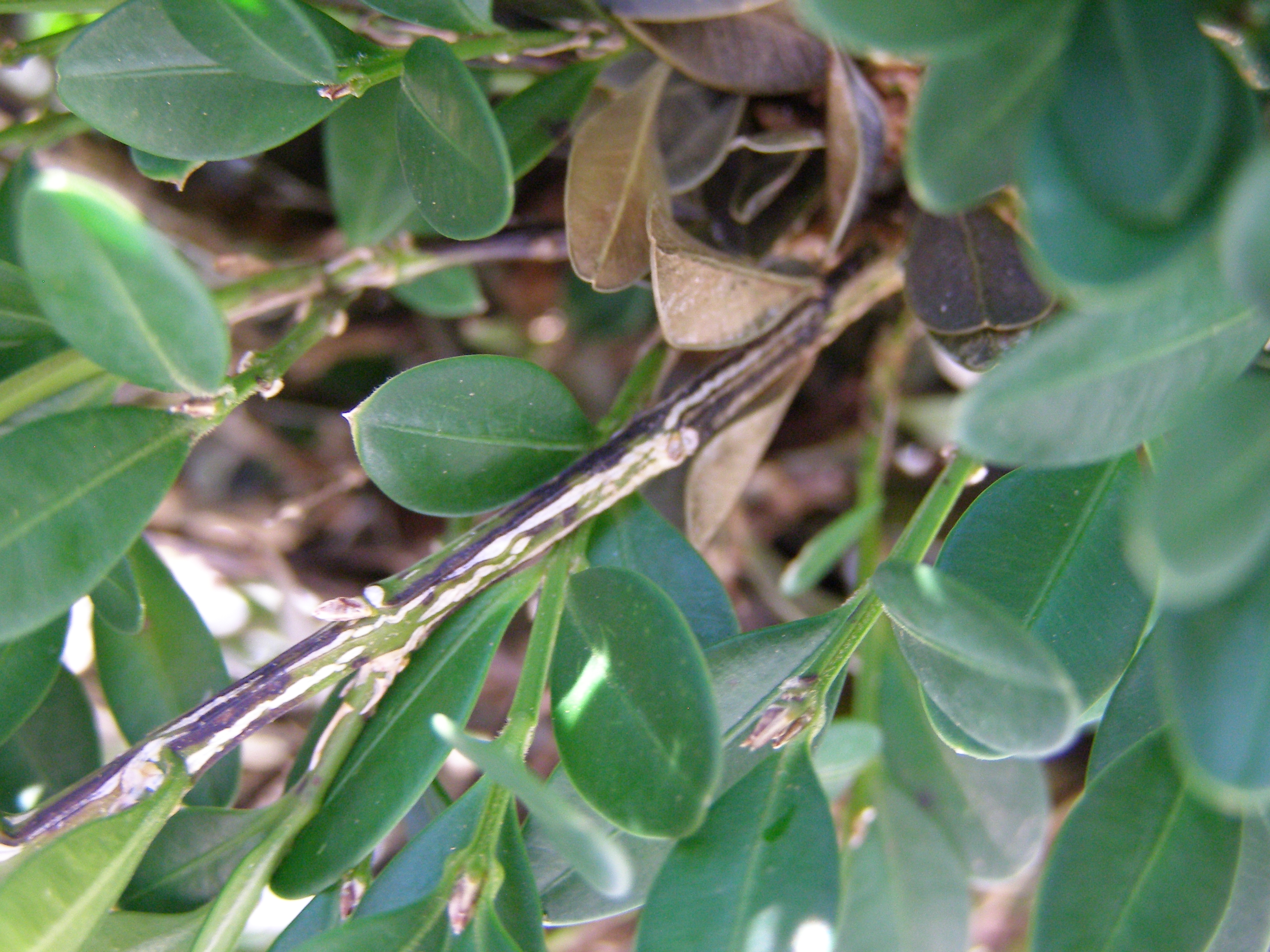 Volutella leaf blight can also affect boxwood and be mistaken for boxwood blight. The University of Minnesota Extension website has information on diagnosing problems with boxwood.

Boxwood blight is considered reportable by the United States Department of Agriculture Animal and Plant Health Inspection Service (USDA APHIS). This means that the first find of boxwood blight in each state should be sent to the National Mycology Laboratory. Discovery of boxwood blight in Minnesota could result in regulations to prevent spread and in measures to control or eradicate the disease.

The University of Minnesota Plant Diagnostic Clinic is available to test samples of unknown plant problems. Contact the Minnesota Department of Agriculture via email at Arrest.the.Pest@state.mn.us if you suspect you have found boxwood blight.