Fruit pest new to Minnesota, spotted wing drosophila was first found in the U.S. in 2008 in California. 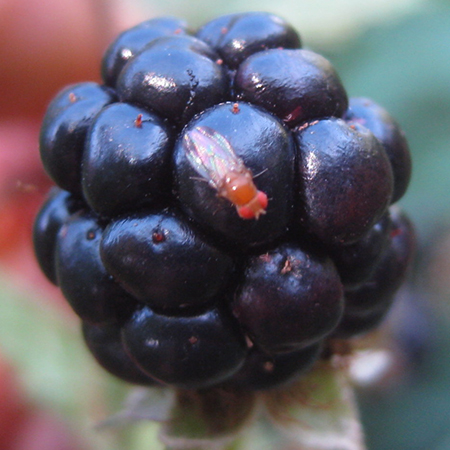 In Minnesota, raspberry has been the hardest hit crop. Other host crops that occur in Minnesota that are susceptible to spotted wing drosophila (SWD) attack include blackberries, blueberries, strawberries, grapes, plums and cherries. SWD will also attack wild berries such as elderberry and buckthorn and these hosts could serve as a reservoir.

Research in California has shown losses as high as a 40 percent for blueberries (Bolda et al. 2010) and 20 and 50 percent losses in strawberries and raspberries, respectively (Goodhue et al. 2011). Minnesota has an estimated 750 acres of raspberries, strawberries, grapes, and blueberries valued at approximately $9.9 million. Another concern is the growing number of high-tunnel operations in Minnesota. There are currently more than 5,000 statewide, valued at approximately $25 million. Spotted wing drosophila has been found to infest crops planted in these structures.

Although not harmful to eat, raspberries, blackberries, and other soft fruit with spotted wing drosophila larvae inside are not marketable for commercial fruit growers.

Drosophila species are small brown flies with striped abdomens and red eyes. It takes a close look to differentiate spotted wing drosophila from other flies, but with a little experience and a 10x hand lens anyone can do so. Spotted wing drosophila can only be definitively identified in the adult stage; however, many people have encountered the larvae inside harvested, ripe fruit.

Adult male spotted wing drosophila have a single dark spot near the tip of each wing and two dark combs (may look like bands) on each of the front legs. Adult females do not have these characteristics but can be identified by their large, serrated ovipositors.

Many times fruit does not show obvious symptoms of spotted wing drosophila infestation. There may be only a small pinprick visible from egg-laying. Within a few days, however, the fruit will start to break down and brown discolored and sunken areas will form. By this point, the white larvae can be relatively easy to detect within the fruit. People will commonly not recognize that berries are infested until they are placed together in a container which often results in the larvae moving to the top surface of the berries.

Many species of flies could be confused for spotted wing drosophila, particularly when trying to identify females. Other drosophila species will be similar, but can be differentiated by the lack of wing spots (males) or the small, weakly toothed ovipositors.

There are no federal, state or local regulations pertaining to spotted wing drosophila as it is so widespread.