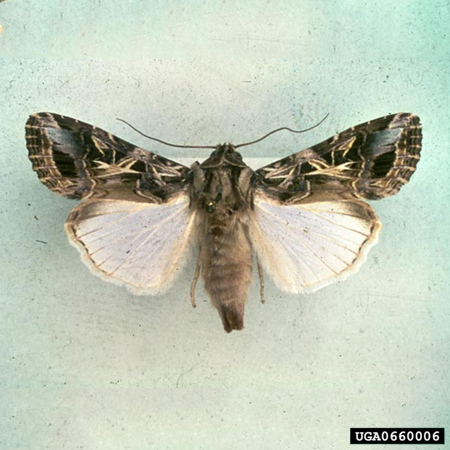 Egyptian cottonworm has a wide host range of more than 80 plant species from over 40 plant families including vegetables, fruits and ornamental crops. In Minnesota some of our main crops that could be affected include soybean, alfalfa, corn, apples, grapes, beets, and potatoes as well as some ornamental poplars and pines.

Spodoptera littoralis is not present in the U.S., but has been intercepted 65 times at U.S. ports of entry since 2004. It was detected in greenhouses in Ohio during the 1980s but was eradicated. Immature stages of Egyptian cottonworm are spread through international trade on planting material, cut flowers, or vegetables and imported commodities. If Egyptian cottonworm became established in North America, it could also invade new areas through adult flight.

A female moth lays masses of eggs on the underside of young leaves. Eggs are then coated with scales from the female’s abdomen. After egg hatch, caterpillars feed on leaves and also may feed on stems, buds, flowers and fruits. Pupation occurs just below the soil surface in a clay cocoon. Multiple generations per year occur in its native range.

The Egyptian cottonworm can be easily confused with Spodoptera species native to the United States, many of which are commonly found in Minnesota. Thus, identifying Egyptian cottonworm will require specimens of adult moths and an experienced entomologist.

Adult Egyptian cottonworm forewings are gray to reddish-brown with pale lines running along the veins while the hindwings are a grayish white and iridescent with gray margins and lack any dark veins. Adults wingspan is about 1¼ to 1½ inch long. Larvae are 1½ - 1¾ in long with color that varies from blackish-gray to dark-green, becoming reddish-brown or whitish-yellow. They have light longitudinal bands and two dark-semi circular spots on their backs.

Federal and state regulations would likely be implemented if the Egyptian cottonworm was discovered in Minnesota. Actions in response to a discovery may include restricting the movement of materials that could harbor Egyptian cottonworm as well as measures to suppress the growth of or eradicate any infestations.