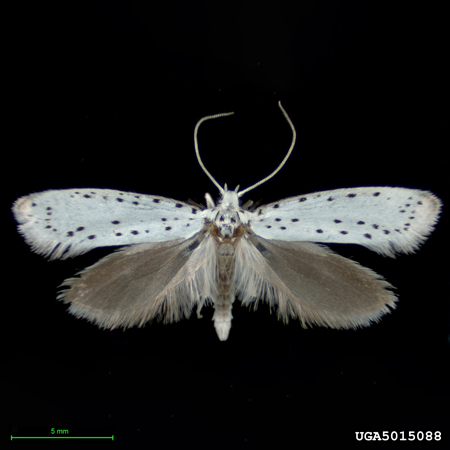 Apple ermine moth attacks apple and crab apple (Malus spp.). In the Pacific Northwest, it primarily attacks abandoned orchards and backyard trees but could also become a pest in commercial orchards by causing defoliation at the tips of branches of apple trees. Severe defoliation can cause fruit to stop growing and prematurely drop.

Apple ermine moth has only one generation per year. They overwinter as young larvae underneath old egg masses from the previous year. In early spring the larvae emerge and move to nearby developing leaves where they will mine in the leaves. Later in the spring they begin to feed in communal webs like tent caterpillars - several tents may be created in each tree. Larvae continue feeding until June, when they pupate. Pupating caterpillars line themselves up neatly in tightly packed clusters. Adult moths begin to emerge in June and lay eggs from July through September.

Adults are small - ½ inch to ¾ inch - with snowy-white forewings, grey hind wings, and long fringes on the wing margins. The upper sides of the forewing usually have 15 to 30 small, black dots arranged or distributed in three or four rows. Larvae of the apple ermine moth are varied in color and can be grey, yellowish-grey, greenish-brown, and greyish-green with a black head and two conspicuous rows of black dots running the length of the caterpillar’s back.

If apple ermine moth were discovered in Minnesota, it is possible that actions would be taken to prevent its spread to new areas and eradicate an infestation if it was discovered prior to establishment.

Contact the MDA via email at Arrest.the.Pest@state.mn.us if you suspect you have found an apple ermine moth.