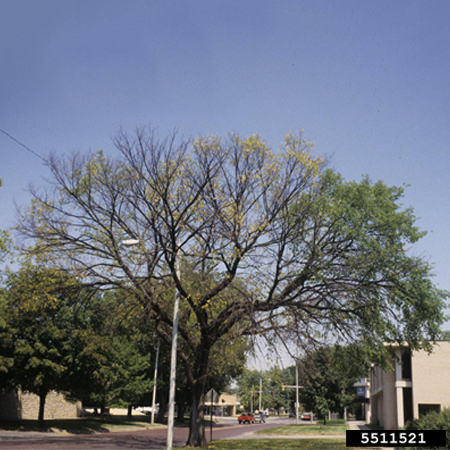 Dutch elm disease is caused by the fungi Ophiostoma novo-ulmi and O. ulmi. These fungi are often vectored by elm bark beetles of which there are a few species found in Minnesota. When bark beetles feed on twigs and branches, the fungus is introduced into the vascular system and spreads to other parts of the tree, including the roots. The tree tries to stop the spread of the fungus by producing plug-like structures which actually block the flow of water and contribute to its wilt. Very susceptible trees may die the same season they were infected; others may take several years. The fungus can spread to adjacent elm trees through root grafts.

The first symptom in trees infected with Dutch elm disease is usually a small area of yellow or brown wilting foliage called “flagging,” often beginning with a branch on the edge of the crown. The area expands and progresses toward the trunk. Wilted branches may have brown streaking in the sapwood which can be seen if the bark is removed. The University of Minnesota plant disease clinic can test elm samples for Dutch elm disease.

Elm trees are still a significant part of many forests and urban landscapes. Elm trees planted in communities today are usually of cultivars considered resistant to Dutch elm disease.

Check and follow local regulations regarding removal and disposal of Dutch elm-infected trees as well as storage of elm firewood. One of the primary means of minimizing the incidence of Dutch elm disease in urban areas is good sanitation of infected material. Injections with fungicides can help protect elms against the disease when it is spread by insect feeding.