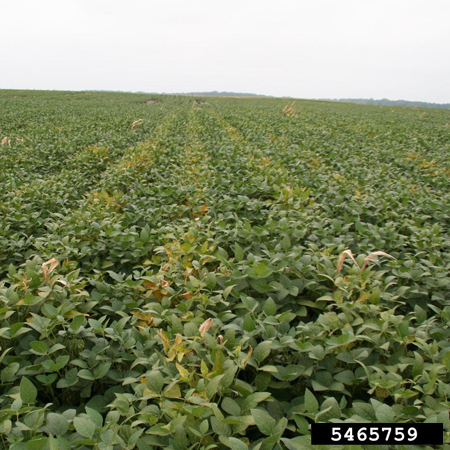 Soybeans (Glycine max) are the primary host for sudden death syndrome, but the pathogen can also infect snap, dry and lima beans. Soybean yield losses greater than 50 percent can occur from this disease. In areas infested with soybean cyst nematode, the effects of sudden death syndrome are more severe.

The pathogen was first observed in the U.S in 1971 in Arkansas and has since been discovered in a number of states in the central U.S. It was first documented in Minnesota in 2002 and has now been confirmed throughout soybean producing areas of the state with the exception of far northern Minnesota.

Sudden death syndrome is caused by a soil-borne fungal pathogen which invades the roots and lower stem of the soybean plant, producing toxins that are taken up into the leaves and cause symptoms. Disease that develops early in the season may result in aborted flowers and young pods, resulting in significant yield loss. The later in the season that the disease develops, the less the impact on final yield. The fungus survives between soybean crops by producing hardy spores that remain on residual root material and in infected soil throughout the winter months, withstanding freezing temperatures. When the appropriate temperature and moisture levels are reached in spring, spores near soybean roots germinate and infect roots of young plants.

Confirming the presence of soybean sudden death syndrome will require a laboratory test available from the University of Minnesota Plant Disease Clinic. Early symptoms of infection include areas of leaf yellowing between the veins that eventually die and turn brown. Diseased leaves may cup or curl and then drop from the plant. A particularly distinctive symptom of sudden death syndrome is a tan/brown discoloration of the interior of the lower stem and tap root when split, but note that the pith remains white. In advanced infections, masses of pale blue fungal spores may be seen on the roots.

Brown stem rot, stem canker and charcoal rot display foliar symptoms similar to soybean sudden death syndrome, but the diseased leaves usually remain on the plant in these other diseases. In brown stem rot, the pith is brown. Chemical burn can also display similar foliar symptoms but examination of the roots would show a healthy root system.

Sudden death syndrome of soybean is not regulated at the federal, state or local level.

What Can I do?

Contact MDA via Arrest the Pest if you think you have found sudden death syndrome of soybean.