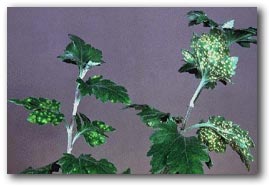 Chrysanthemum White Rust (CWR) is a destructive disease of many chrysanthemum and related species. The infection is caused by a fungus called Puccinia horiana Henn. This disease has the potential to be extremely damaging to the commercial horticulture and florist industries if it becomes established in the United States.

The disease originated in China and Japan, and eventually spread to Europe, Australia, South America and Africa. Introductions on CWR infected plants have occurred in both the U. S. and Canada. Fortunately, successful eradication treatments have prevented establishment, so far. The disease transfers from infected stock to healthy plants primarily by splashing water that contains infectious spores. CWR may also be spread to uninfected plants by contaminated soil, litter, dead leaves, gardening equipment, clothes, shoes, and hands. The infectious spores can survive on these types of contaminated objects for up to eight weeks. 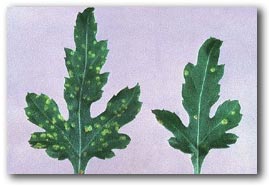 Symptoms usually develop during cool, wet weather and typically appear five and 14 days following infection. Applications of fungicide or hot, dry weather can mask or significantly delay symptom development. Infected plants typically show symptoms on younger leaves and flower bracts, but symptoms can also occur on older leaves and petals. Visible symptoms include: small, dimpled white to yellow spots (up to four mm wide) on the upper side of the leaf, spore-forming, buff to pink pustules form on the lower side of the leaf, turning white with age.

The international spread of the disease has been checked primarily by exclusion (quarantines). Importation of chrysanthemum spp. is prohibited or restricted from most countries except Canada. When CWR has entered the United States, survey, sanitation, modified cultural practices and fungicides have successfully eradicated the disease. Because CWR has the ability to spread rapidly, early detection is extremely important in controlling this particular disease.

CWR is a quarantine significant pest in the United States and Canada and must be reported to the appropriate regulatory officials in your state immediately.

Contact the MDA via Arrest the Pest if you suspect you have found Chrysanthemum White Rust.