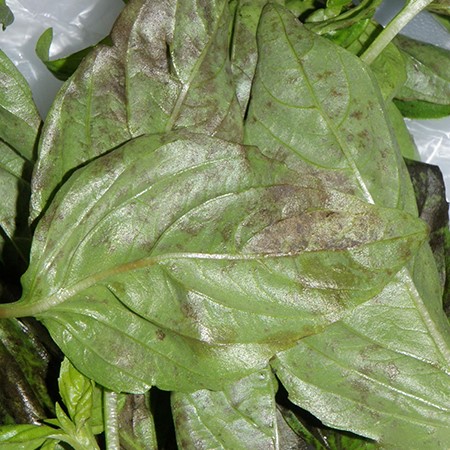 Sweet basil varieties are the most susceptible. Other varieties, such as red or Thai basils, have demonstrated some resistance. Symptomatic basil is unmarketable, which is of significant concern for commercial producers of this popular culinary herb. Under the right conditions, basil downy mildew can spread rapidly and cause large yield loss.

Basil downy mildew does not overwinter outdoors in Minnesota, but instead is reintroduced to the environment each growing season by the importation of infected seed or plants. Basil downy mildew may also spread via spores blown in the wind.

The pathogen responsible for basil downy mildew, Peronospora belbahrii, is part of a larger group of fungus-like organisms known as “water molds” which are actually more closely related to algae than to fungi.

In the U.S., basil downy mildew is only able to survive within infected seed, or reproduce asexually in living plants (during the growing season or in greenhouse environments). Sexual reproduction requires a specific mating partner not currently present in the U.S., which would produce what are known as oospores. Basil downy mildew is unable to survive in the absence of living plant material for this reason.

Initially, basil downy mildew can be mistaken for nutrient or mineral deficiencies in the plant, with leaves becoming yellow at the base of the plant and continuing upwards. Upon closer inspection, the pattern of yellowing will present as bands between major leaf veins with corresponding fuzzy gray spores of the pathogen on the leaf underside. As the infection progresses, chlorosis and the presence of spores will become quite apparent and widespread.

Basil downy mildew produces symptoms in basil similar to those seen from malnutrition and heat stress or sunburn. Spores on a leaf can also look like dirt or dust on plant tissue.

There are no effective ways to treat for basil downy mildew once plants have become infected, so planting resistant varieties and using fungicides prior to infection is recommended. For more information on the susceptibility of various basil varieties as well as appropriate fungicides, consult the University of Minnesota Extension’s basil downy mildew page.

If early stages of basil downy mildew are suspected on a plant, suspicious leaves can be incubated in a dark place enclosed in a plastic bag with a damp paper towel. Any resulting spore production in the following days may indicate the presence of basil downy mildew. Contact the MDA via email at Arrest.the.Pest@state.mn.us for help with identification.