Ralstonia solanacearum (bacterial wilt) is a bacterium that causes wilting and death of solanaceous plants like potato and tomato. 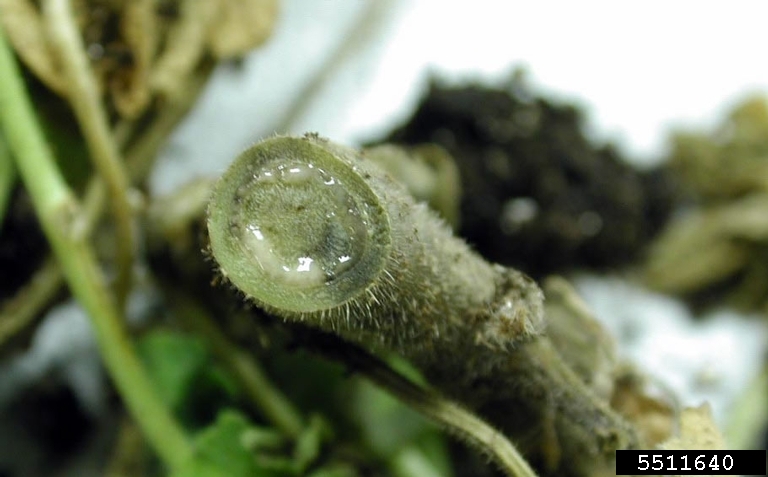 Primary hosts of R. solanacearum race 3 biovar 2 includes members of the Solanaceae family like potato, tomato, and geranium. Imported ornamental plants and cuttings, especially geraniums (Pelargonium spp.), are considered a significant risk for introducing this bacteria to the U.S. and may be required to have documentation certifying their freedom from this pathogen before import is allowed.

Ralstonia solanacearum is a bacterium that can infect over 200 different plants, with the Solanaceae (potato family) containing the highest number of susceptible species. Infections can cause wilting and death of susceptible plants. Introduction to a new area occurs through propagative plant material such as infected seed potato tubers and ornamental cuttings. In addition to surviving in plant material the bacteria can also persist in soil or planting media as well as irrigation and waste water, and spread to other fields occurs by surface runoff water and infested soil that is moved on equipment.

Infected plants show wilting of part or all of the plant, followed by leaf yellowing then death of the leaf between the veins and stunted growth. The stem interior becomes discolored and dark streaks may be visible. A sticky or slimy substance containing the bacteria may ooze from freshly cut infected stems, and is especially visible if placed in water. A cross section of an infected potato tuber may show a ring of brown discoloration and light pressure may produce an ooze. On intact tubers, soil may stick to ooze around the eyes.

Wilted, yellowing leaves can be due to environmental factors as well as other diseases, including other strains of R. solanacearum. Root rots caused by many fungi can also cause leaf wilting, yellowing of leaves, and stunted growth. In geraniums, bacterial leaf blight caused by Xanthomonas hortorum pv. pelargonii causes leaves to wilt and yellow, similar to R. solanacearum R3bv2, but this disease also causes round tan - brown spots on the leaves. In potato, tuber symptoms of bacterial ring rot caused by Clavibacter michiganensis subsp. sepedonicus can look similar to those caused by R. solanacearum R3bv2.

The MDA is monitoring for R. solanacearum through a variety of methods including surveys. Visit the University of Minnesota website for information about diagnosing plant problems. The University of Minnesota Plant Diagnostic Clinic is available to test samples of unknown plant problems. Contact the MDA via Arrest the Pest if you suspect you have found Ralstonia solanacearum R3bv2 in Minnesota.