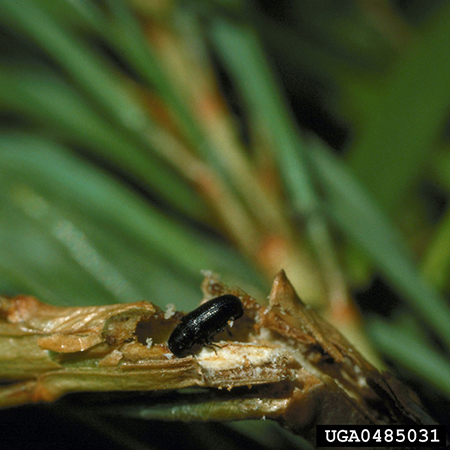 Scotch (Scots) pine is the primary host for pine shoot beetle although all pines are potential hosts and it is reported to attack other conifers when beetle populations are high. No significant problems have been reported in Minnesota despite the presence of pine shoot beetle for at least ten years.

The pine shoot beetle was first found in the U.S. in 1992 (Ohio) and can now be found throughout the Northeast U.S. and Great Lakes Region. It was first found in Minnesota in 2004 when beetles were captured in traps in Anoka, Dakota and Ramsey Counties.

Pine shoot beetles emerge in early spring. Adult beetles create tunnels beneath the bark of pine logs, stumps or declining trees and reproduce. Eggs are laid underneath the bark where the small larvae feed, complete development and pupate in May and June. These new beetles then emerge from host material and seek out the new shoots of pine trees to tunnel in and feed upon. One beetle may feed in more than one shoot. When temperatures turn cold, beetles will move down to the bottom of the tree and tunnel into the bark to spend the winter. This insect can also introduce various species of blue stain fungi into pines.

In November 2020, USDA deregulated pine shoot beetle. In the past there were restrictions on the movement of materials out of Minnesota that could harbor pine shoot beetle (Christmas trees or other greenery), but those restrictions are no longer in place. However, Christmas trees and other materials are regulated in areas of Minnesota where Lymantria dispar is present.