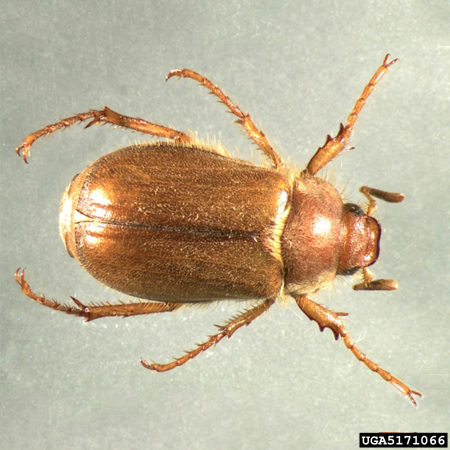 Adult beetles emerge from the soil between mid June and early July in Michigan and New York, though emergence times vary and depend on temperature. Most European chafer beetles have one generation per year, but a small proportion of the population may require two years to complete development. Adults are active on warm evenings (above 65 degrees F) for several hours just before and after sunset. Eggs are laid two to four inches below the soil surface and hatch in early August. Larvae feed on the roots of turf. Grubs overwinter just below frozen soil and return to the surface as soon as the ground thaws. When the grubs are ready to pupate in late spring to early summer, the grubs will again descend lower in the soil.

European chafer adults are about a half-inch long and tannish in color. They are similar to the “June bugs” commonly found in Minnesota in early summer but are generally a bit smaller and lighter in color.

Larvae have the typical C-shaped appearance of white grubs and can range from ¼-inch to 1-inch long with a dark brown head and conspicuous legs. The grubs may be distinguished from other white grubs through characteristics of the posterior of the abdomen, but an experienced entomologist may be needed.

There are no federal, state or local regulations related to European chafer

Visit the University of Minnesota website for information about diagnosing and managing problems with lawns and turf. Contact the MDA via Arrest the Pest if you suspect an infestation of European chafer in Minnesota.