Most chlorpyrifos products are classified as a restricted use pesticides (RUP). Only licensed (commercial or non-commercial applicators) or certified (private applicators) can sell, buy, or use RUPs.

Chlorpyrifos acts as a nerve agent and is classified as an acetylcholinesterase (AChE) inhibitor (Group 1B) by the Insecticide Resistance Action Committee. Insects can be exposed to chlorpyrifos through either direct contact, ingestion, or inhalation.

Chlorpyrifos functions by binding to AChE, thereby preventing the breakdown of acetylcholine (a neural signal carrier). Subsequent accumulation of acetylcholine causes overstimulation of nerves which can result in paralysis, seizures, and eventual death of the insect. Other organophosphate insecticides that share this mode of action include diazinon, malathion, parathion, dichlorvos, and terbufos.

As of April 2022, 9 products with chlorpyrifos as an active ingredient are registered in Minnesota.

Historically, chlorpyrifos was the highest selling insecticide in the state with consistently high sales from 2010-2018 (see figure). The MDA gathers sales data from pesticide dealers and registrants to determine the number of pounds of pesticide products sold each year. Historic sales data can be found using the Pesticide Sales Database Search. 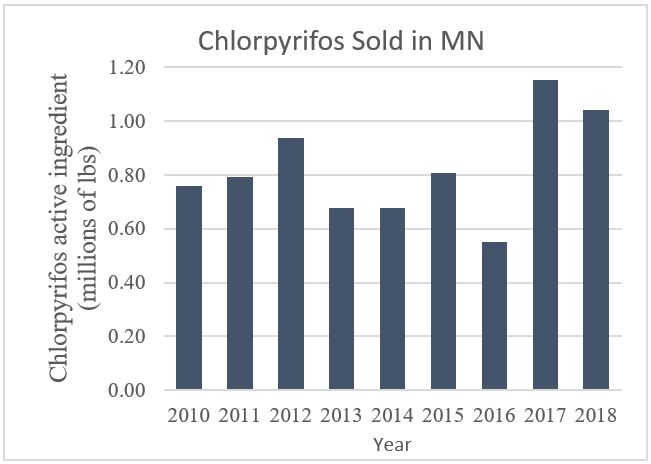 Chlorpyrifos in the Environment

Chlorpyrifos enters the environment from routine use where it can move and degrade in a number of ways. How chlorpyrifos moves is largely determined by its physical and chemical properties, as is the length of time it persists after application. Site-specific conditions, such as weather and soil type, are also key in determining its fate, along with the formulation applied (e.g., liquid vs. granular), method of application (e.g., ground-based or aerial), and other use factors (e.g., rate, timing). Chlorpyrifos has a low solubility in water and binds strongly to soil, which limits its mobility. Being relatively immobile in soil, leaching to groundwater is not expected; however, there is potential for chlorpyrifos to move with runoff into surface water, primarily with eroded sediment. Spray drift and volatilization from ground and aerial spray applications are additional ways chlorpyrifos can enter the environment. Spray drift can occur during the application process as fine spray droplets move away from the treated area. Volatilization of chlorpyrifos predominantly occurs from leaf surfaces shortly after foliar application. The resulting vapors can disperse and move offsite through atmospheric transport.

In soil, chlorpyrifos is primarily broken down through microbial degradation and its half-life can range from a few days to over 100 days. In aquatic environments, chlorpyrifos can undergo abiotic hydrolysis, biodegradation, and photodegradation. Oxidation and photolysis are key degradation processes in air and on foliar surfaces.

According to the U.S. Environmental Protection Agency (EPA), chlorpyrifos is moderately toxic to humans by oral, skin, and inhalation exposure, and not likely carcinogenic to humans [1]. Chlorpyrifos is metabolized in the human body to the more toxic and potent AChE inhibitor, chlorpyrifos oxon. Two toxicological endpoints, AChE inhibition and neurodevelopmental effects, have been used by the EPA for hazard characterization of chlorpyrifos and its oxon. Accumulation of acetylcholine in neural junctions due to the inhibition of AChE by chlorpyrifos oxon results in the acute signs and symptoms of cholinergic overstimulation (e.g., cramps, muscular weakness, paralysis, death).

Due to the potential risk to human health, the EPA has developed a set of requirements that must be followed when applying chlorpyrifos products.

Terrestrial organisms such as mammals, birds, and invertebrates may be exposed to chlorpyrifos and its degradates through multiple routes including contact, inhalation, and diet.

Aquatic organisms, including freshwater fish, invertebrates, and plants, can be exposed to chlorpyrifos or its degradates through contaminated surface water bodies such as lakes, ponds, rivers, and streams. Chlorpyrifos may bioaccumulate in organisms, which poses additional risk to organisms higher in the food chain. Due to toxicity to aquatic life, setbacks from surface water are required for many liquid product applications.