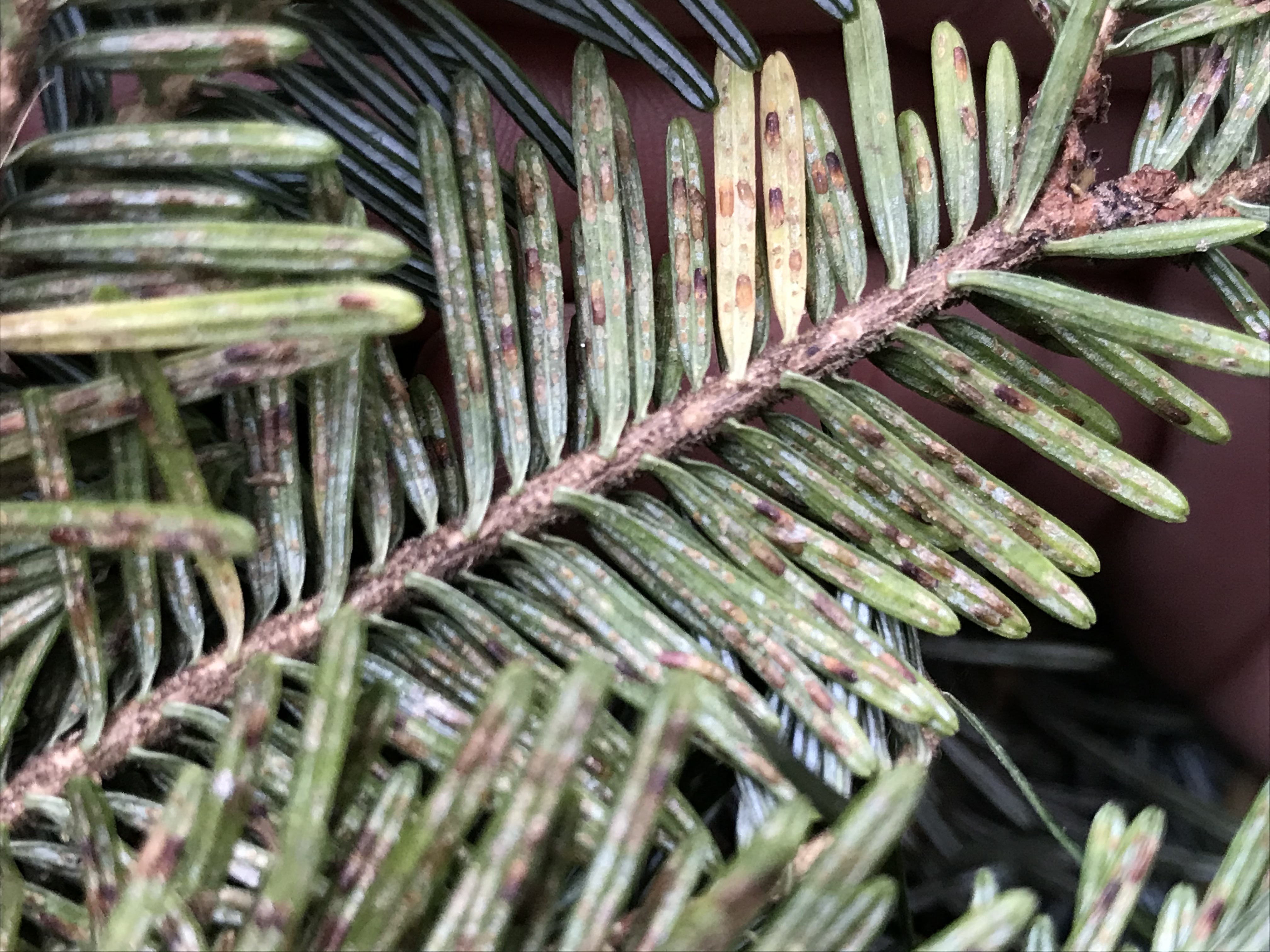 Elongate hemlock scale is reported to develop and reproduce on 43 species of native and exotic conifers. Primary hosts include hemlocks (Tsuga sp.), firs (Abies sp.), and spruce (Picea sp.) of which several species are native to the United States. Spruce and fir are reported to be more susceptible than hemlock, but the elongate hemlock scale has not become established in areas where these trees predominate. 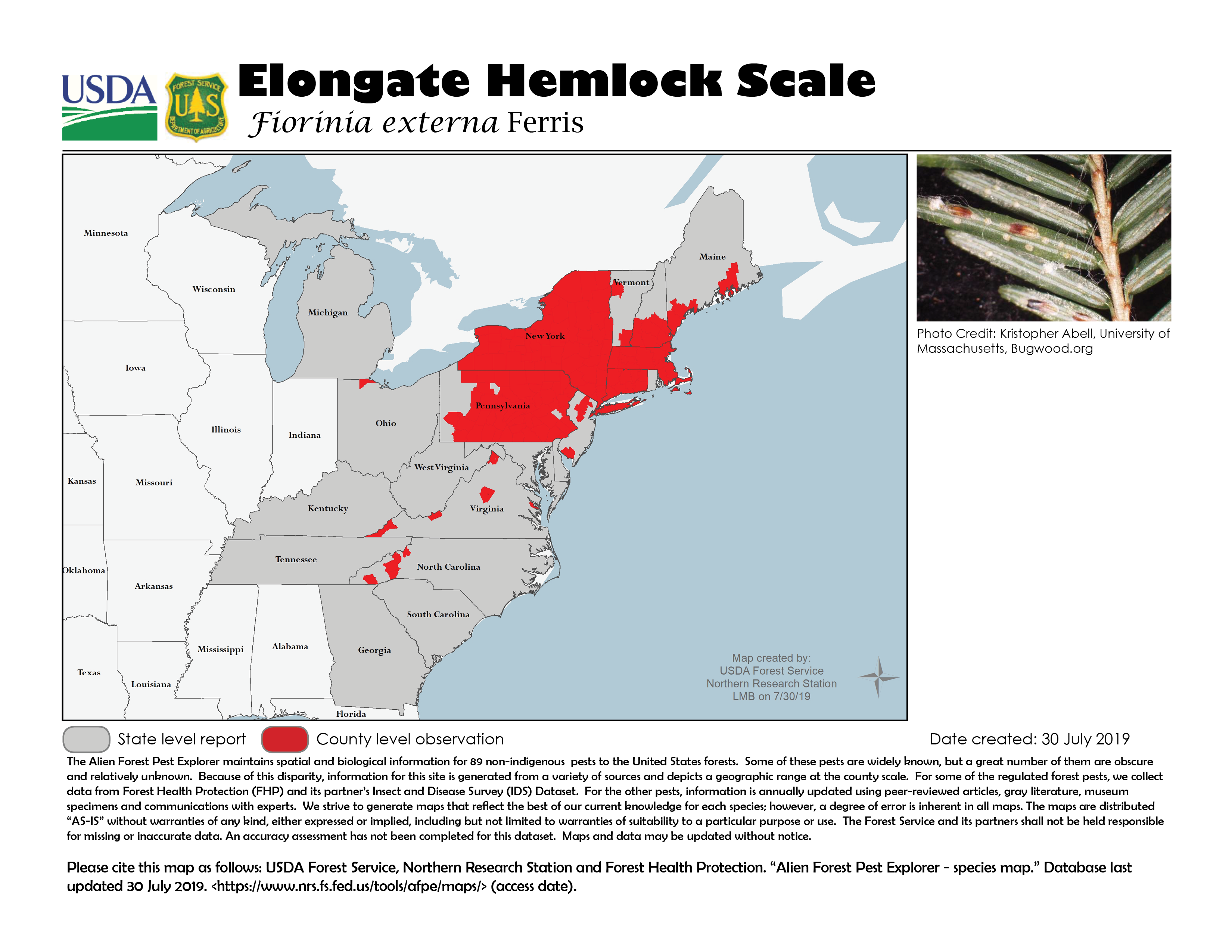 Scales are very small insects that secrete a waxy coating for defense and feed on the sap from plants.  They have piercing/sucking mouthparts they insert into the host plant for feeding. Once they begin feeding, most species of scales remain stationary on the plant.

In northern regions, the elongate hemlock scale completes one generation per year; however, two generations per year occur in southern regions. This insect typically overwinters as an egg or a female carrying eggs. The life cycle consists of immobile adults and mobile immatures called “crawlers”. Crawlers are the only part of the life cycle that are capable of dispersing and establishing new populations, and this usually occurs via birds or the wind. The life stages broadly overlap, so crawlers may be found throughout spring and summer. Males and females look quite different because the males have wings. 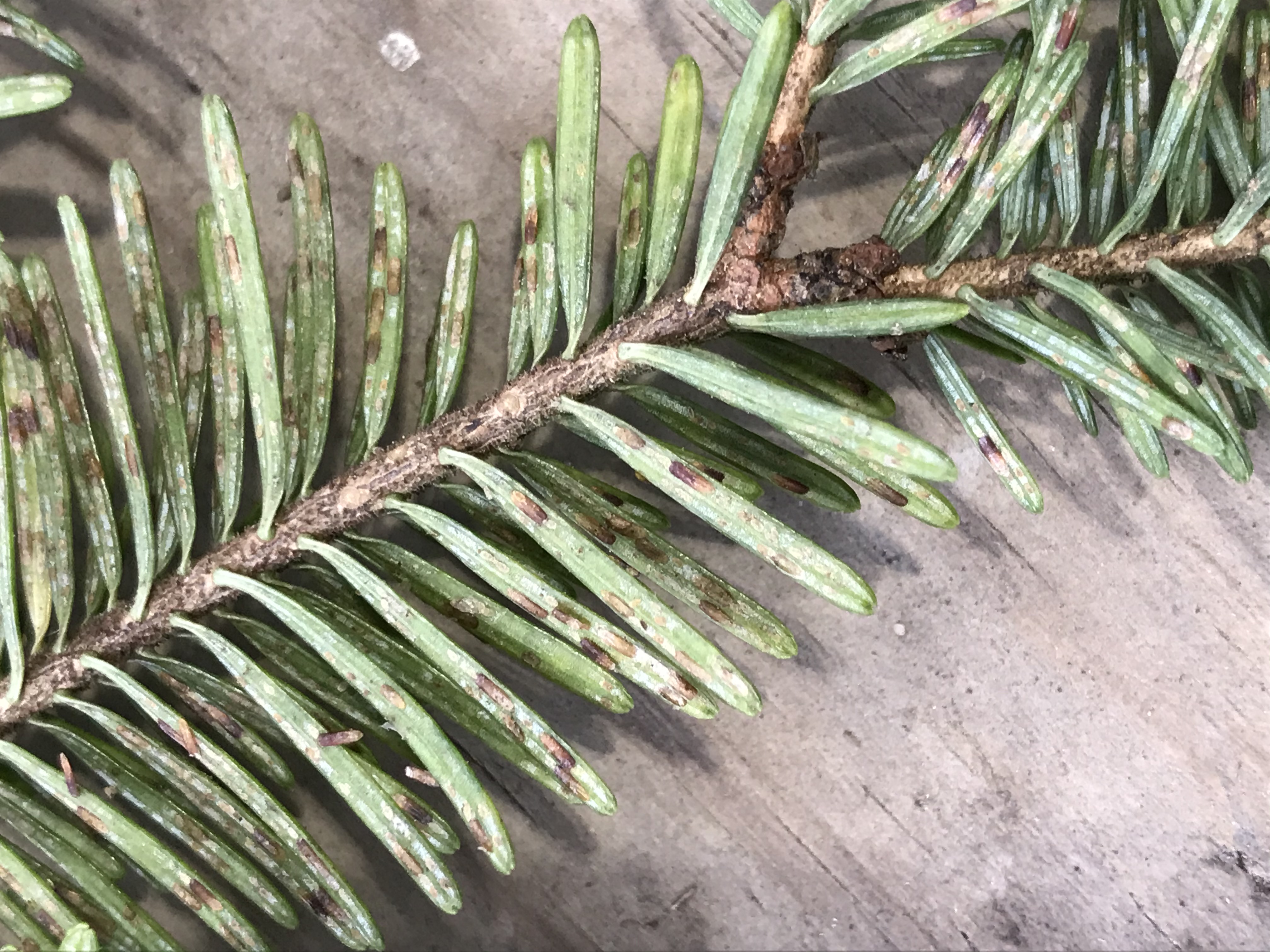 The elongate hemlock scale female, which would normally be seen if an infestation is present, is dark brown, longer than wide, and typically found on the underside of the needles. However, these insects are very hard to detect. Signs of elongate hemlock scale include a yellow banding on the top of infested needles which can lead to premature needle drop.  The crowns of infested trees may have a thin appearance.  This insect has been intercepted several times in Minnesota, and if it becomes established, it could pose a threat to our native conifer species such as spruces and firs.

In the United States, this pest is established in the Atlantic States and sometimes occurs alongside two other exotic pests - a circular hemlock scale (Nuculaspis tsugae) and the hemlock woolly adelgid (Adelges tsugae).

There are a multitude of scale insects that will infest conifers, many of which look very similar. It is important to have the insect properly identified by a specialist.

Elongated hemlock scale is not known to occur in Minnesota at this time and is considered a potential plant pest. For these reasons, the MDA takes steps to prevent the movement of this insect into the state. Items such as nursery stock, Christmas trees, and other holiday greenery entering Minnesota from areas with elongate hemlock scale are inspected to prevent the sale of infested material.

Inspect your holiday greenery for elongate hemlock scale. If you find small (~2mm long) yellow-brown parallel-sided spots on the underside of needles, please take a picture and report it to the Minnesota Department of Agriculture (MDA) using the Arrest the Pest Line.

Do your part to protect our environment when the holiday season is over.